The Amazon Dash is a self-contained WiFi enabled remote control button, available to Amazon Prime members, that we can interface with our home hub as an Impulse button.  The advantage is that we don’t require physical wiring or additional electronics – we just sniff the network looking for the signature mac address of the button. The beauty of this adaptation is that we can implement hybrid Impulses, that respond to either fixed buttons connected to GPIO pins, or dash buttons free floating on the network.

The process to configure the button, without actually committing yourself to the repeated purchase, is well documented elsewhere. The key piece of information we require is the button’s mac address.  I was able to glean this from my router log, or you can try the python test program sniff_test.py below.

Run the test program with the following command:

and you should see a list of mac addresses from devices on your network. Wait a while to hoover up non-dash packets then press the button, and look for a different mac address. You may see double entries for the dash, but don’t worry as this will be handled by our existing software debounce routine.

Once we have discovered the mac address we need to add it to the existing impulse configuration. 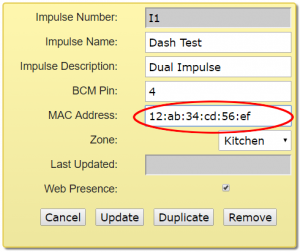 The sniffing is performed by a separate thread in the hub main program. Download the new main_sched py file:

and a revised impulse processor:

and restart the controller to use the modified files.

Now you should be able to enjoy remote control for any of the devices in your hub.

In the next post I will look at backing up the hub database.